Summit Credit Union sought to design their newest branch in Mount Horeb, Wisconsin as a beacon of the community. The design of the project was a result of Strang’s facilitation of a successful collaboration between Summit Credit Union and the Village of Mount Horeb. Summit’s goal was for a contemporary design with dynamic trapezoidal shapes and single sloped roof forms with sloping eaves, while the Village of Mount Horeb had design covenants that required traditional gable roof forms. The resulting design captures both these goals with a design covenant-compliant gable roof, but with a creative twist: the gable roof is trapezoidal, creating a dynamic sloping eave that captures Summit’s modern, dynamic brand.

The Village of Mount Horeb Plan Commission required the building to front onto its public street frontage on Springdale Street (Highway ID), with parking located away from the street. This branch was designed with a welcoming street façade on the north and a main entrance and parking lot on the South in response to the fact that the site has two “fronts” and no “back”. The dynamic trapezoidal forms of the glazed curtainwall, brick fin and roof overhangs reach out to the community on Springdale Street.

In regard to design and the addition of a positive economic driver like Summit Credit Union, the Mount Horeb branch adds a valuable asset to the community, while still expressing their unique culture and vision. The building reaches out to its context, projecting an image of openness and transparency. In the months that the branch has been operational, the facility has quickly established itself as a well-known landmark in the Mount Horeb community and a catalyst for its growing East-Side Commercial District.

The design of this branch was a result of a thoughtful months-long collaborative effort between Summit Credit Union (owner), Strang (architect/interior designer/engineer) and Findorff (general contractor), to create an efficient, cost-effective branch prototype that expresses Summit’s brand while accommodating all their functional needs.

The design of this branch is the result of rethinking the notion of the “traditional” financial institution, instead creating openness and transparency with forward-looking architecture. The material palette of shimmering manganese iron spot brick and silver metallic metal juxtaposed with splashes of bright color create a contemporary, energetic feel. A colorful and light-filled interior creates an informal and welcoming atmosphere for the branch.

Comfortable, informal seating areas and dynamic displays animate the space. In lieu of a traditional teller line, open and inviting “teller pods” help facilitate casual and friendly interactions between Summit members and staff. The design carefully balances a feeling of openness and informality, while adhering to the strict security needs of a financial institution. The facility also provides comfortable meeting spaces with varying degrees of privacy. A unique branch feature is the provision of transparent offices and meeting spaces with glass sliding doors, patterned glazing, and colorful, comfortable furniture. 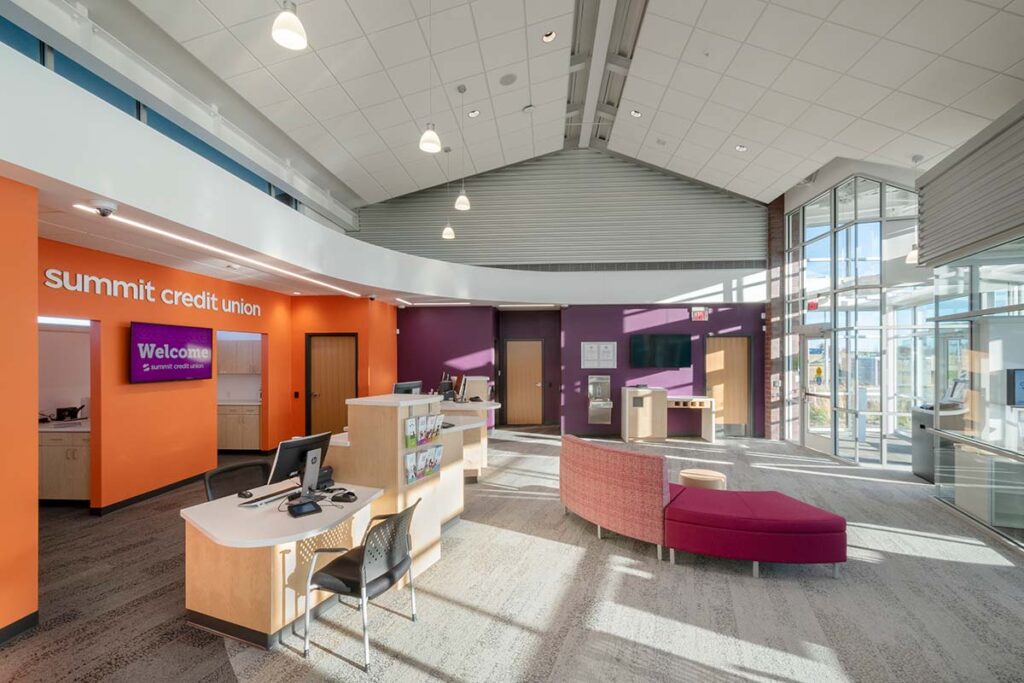 Summit’s new building will support 11 Summit Credit Union Staff members and upwards of 200 members on any given day. Their reach into the Mount Horeb community is not as easily measured. With this branch, Summit Credit Union has successfully added a modern financial institution into the fabric of the Mount Horeb community while able to express their company’s unique mission and culture.