And The Award Goes To...

For the past 13 years, In Business magazine has produced the Commercial Design Awards. The award honors the best commercial design projects built in Wisconsin.

We are proud to announce that two Strang clients garnered top awards at the 2020 awards:

Let’s take a closer look at each facility.

Northern Sky Theater had operated for twenty-nine years without a permanent home. While its operations grew, the company continued to expand into more and more rental facilities, which were spread out all over the geographic area of Door County in ways that made day-to-day operations logistically difficult.

Northern Sky opened the new theater to the public on August 30, 2019 and ran its first fall production through October. The response was beyond the expectation of the company, with performances needing to be added in order to fulfill the demand for tickets. What makes this project unique for its Door County context is its very modern aesthetic. There is no other building, of its scale, like it anywhere else in the county.

Northern Sky has over 35,000 people attend its productions annually. There are also nearly floor to ceiling windows in the theater on the south wall. This is highly unusual for a theater space, since darkness is often sought for theatrical lighting purposes. Nonetheless, this feature was embraced as an element that would both marry the new space to the outdoor venue and offer options for using the natural light when desired. Specially designed shutters were manufactured and installed to provide an architecturally stunning feature to the venue, also providing black out when desired.

Northern Sky has a longstanding reputation as an organization providing an excellent experience. This new building adds exponentially to its cache as a professional organization. Over 35,000 people attend Northern Sky’s productions annually, and that number is now expected to grow with the addition of this new facility.

The lobby looks into and through the technical booth, giving patrons a glimpse into the space they will soon be entering, or giving a ticket buyer a chance to see the theater before or after purchasing a ticket without interrupting any activity that might be happening inside. Likewise, those inside the theater and onstage get a glimpse of the activity happening in the lobby, with a view that even extends outward into the landscape and surrounding woods.

Patrons can walk through the lobby and onto the patio and then catch a glimpse of the theater where they were just watching a performance. It is also possible to leave the shutters open during a performance, which the company elected to do during the holiday show. The extraordinary view of the snow-covered woods elevated the experience aesthetically, giving the event a special quality only achievable because of the architectural design. Many patrons have remarked on how delightful and unique these features are. 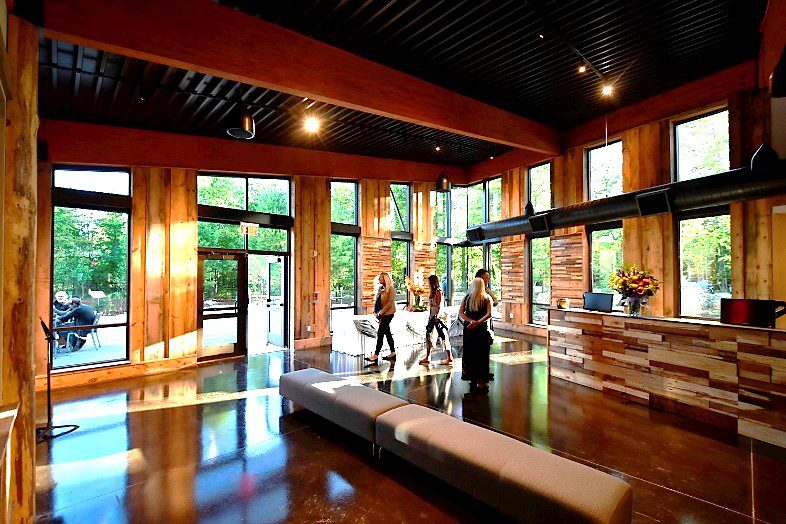 This 2,500 capacity, standing-room only music venue offers Madison concertgoers a unique opportunity to see their favorite performing artists in a remarkably intimate setting. The open three-story space ensures that no patron is more than 85 feet from the stage and maximizes sight lines no matter where one is standing.

Because the Sylvee is designed from the ground-up specifically for music, it is positioned to be an artist-favorite venue in the Midwest. In its first year of operation, many artists have provided positive feedback and some artists have specifically requested to play here. The Sylvee is a crown jewel in the city’s continued development of the East Washington Corridor, bringing a new energy and density to the Isthmus in a self-propagating cycle that will continue to drive positive development in the neighborhood for years to come.

The industrial-chic finish of the venue keeps the focus on the music, and the spartan finishes ensure that there is nothing frivolous or wasteful contributing to the long-term impact of the project. The bar, which is constructed from solid slabs of walnut, locally and sustainably sourced from Northern Wisconsin, provides warmth to contrast with the ubiquitous sealed concrete and exposed metals.

The Sylvee has the amenities and robust, state-of-the-art infrastructure to attract the nation’s biggest acts. In the venue’s first 8 months, over 120,000 tickets were sold for 59 shows, including 27 sold-out performances.

In order to attract the biggest acts to Madison, the design team placed a significant focus on creating the most positive experience for the artists and their crews through strategic space planning. The loading dock and stage are immediately adjacent to each other, and the straight shot of this area called “the push” facilitates easy set-up and tear-down. Few venues in the country can boast a push as convenient as this one.

The bathroom partitions feature tour posters for acts that Frank Productions has promoted over the years. The detailing and mixture of intricate finishes and raw lighting in the restrooms provides an opportunity to pause and appreciate the higher level of visual interest, in contrast with the rest of the theater, which is focused on the performance.