Building Up Ahead of STEAM STEAM Camp 2019: The Imagination Tour

From July 15 to July 19, a group of 45 middle school students descended upon the Madison-area to explore a wide variety of career opportunities and the educational pathways needed to get there. This, is STEAM Camp 2019.

STEM is Important. STEAM is vital.

You’ve heard of STEM, but this is STEAM—Science, Technology, Engineering, Arts, and Math. Now in its fourth consecutive year, Strang’s STEAM Camp is designed to open our campers’ eyes, ears and minds to endless career and educational possibilities within these 5 disciplines. To date, over 200 middle schoolers have successfully completed the program.

This year, campers discovered what it takes to be an atmospheric scientist in Antarctica, a MedFlight nurse, a cartoonist and a pharmacist, and learned how to play African drums, program tiny robots, ballet, budget for a household, 3D printing and penning, plus, learned how meals are prepared for thousands of hospital patients.

STEAM Camp is a fun-filled week of activities and forming new friendships for the campers, but more importantly, it sparks both curiosity and inspiration from which they can begin building their futures.

A big thank you to the Urban League of Greater Madison, Girl Scouts of Wisconsin Badgerland, and Big Brothers Big Sisters of Dane County for sharing STEAM Camp within their organizations. Furthermore, without the help of countless volunteers, chaperones and our generous hosts, this camp would not have been possible. Each and every one of our host locations rolled out the red carpet and granted our kids VIP behind-the-scenes access. Thank you, all.  Your thoughtful generosity is sincerely appreciated.

Building Up, Ahead Of STEAM
Over the week, we did so much, we can’t even fit everything into this issue! But here’s a recap, the week in review.

The end results are students who take thoughful risks, engage in experiential learning, persist in problem solving, embrace collaboration, and work through the creative process. These are innovators, educators, leaders, and learners of the 21st century!"

Campers arrived each morning at the Urban League of Greater Madison for check-in and to meet the other campers. On Monday, they hopped on the bus and traveled to the University of Wisconsin – Madison to check out some of the museums and research centers.

At the Oceanic and Atmospheric Research Center, the campers learned about satellites, weather patterns and oceanic currents. One lucky camper was outfitted with all the necessary gear for an Antarctic expedition—from tinted goggles to reduce glare from the snow to heavy, insulated boots to trek through the ice and snow. We ascended 14 stories (ok, we took the elevator) to reach the roof—one of the highest viewpoints in Madison.

Hopping down the street to the Wisconsin Institute for Discovery, the kids toured the building and explored the state-of-the-art conference room, research labs, and design elements that make the it unique. Using their newfound knowledge, they were challenged to a scavenger hunt.

In the afternoon, we bussed over to the Geology Museum. Once there, we discovered how some minerals are fluorescent, meaning that they emit light in certain conditions, such as under UV rays. The students came face-to-face with a towering Mastodon fossil replica and learned about the dinosaurs that became extinct millions of years ago.

We then headed to the Physics Museum and let the kids loose. Here, they got hands-on experience as with different physics experiments. You should have seen their fasces light-up when they completed an experiment.

To round out the day, we stopped at Babcock Hall Dairy Store for what makes the UW-Campus so special—their own ice cream. Each camper chose a flavor to enjoy on this hot July afternoon (93◦). It may have just been the campers’ favorite stop of the day.  OK, it was. 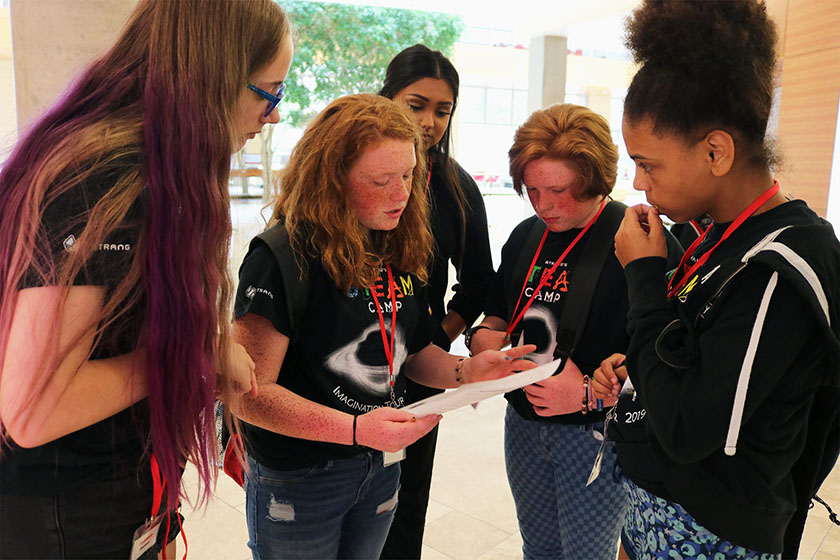 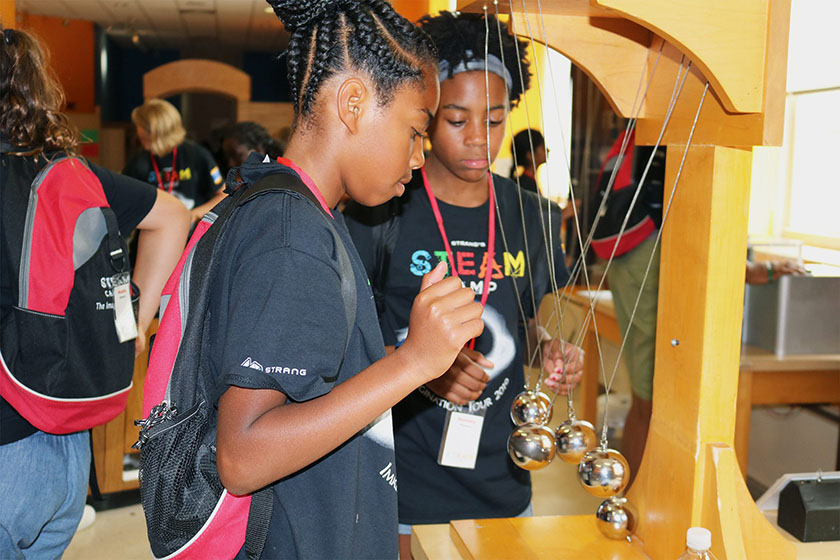 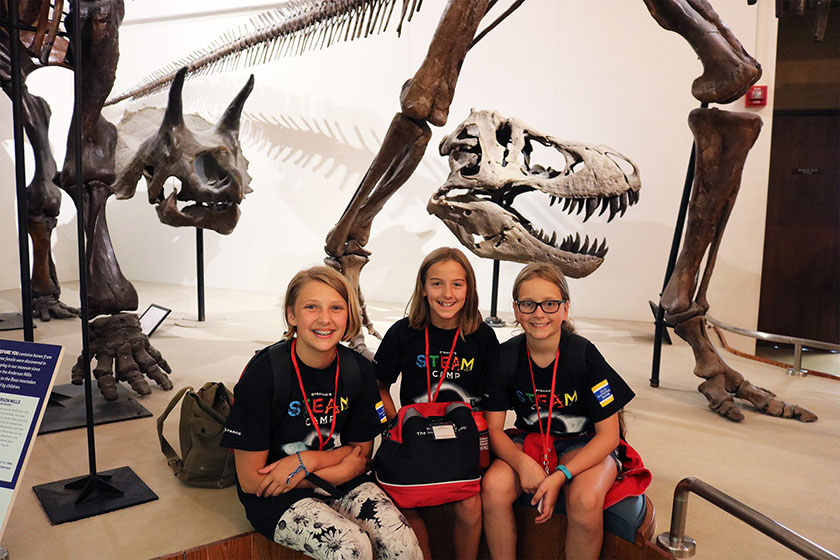 Next stop,  Edgewood College to discover their creative talents. The campers were split into four groups as they rotated through different activities designed to showcase different forms of art.
In one station, an instructor discussed styles of cartoons and lead the groups through drawing a self-portrait and storyboard for their very own comic.

If drawing wasn’t their forte, they certainly enjoyed participating in a traditional African drumming circle. They learned techniques and rhythms to produce different sounds and each took turns performing solos.

They took part in an Arts & Imagination activity, where they relied on their creative problem-solving skills and collaboration to reach an end goal.

On the theater stage, campers were given M&Ms and Skittles… for an activity! Using LED lights and a control board, they observed how the colors of the candies look different under certain colors. After this activity (and a small snack), they toured backstage, the green room and even the catwalks where lighting fixtures can be accessed.

For the afternoon, we headed here to Strang. UW Chemistry Professor, Dr. Bassam Shakhashiri visited to share his widely popular, “Science is Fun” presentation. Curiosity and wonder filled the room as concoctions “magically” changed color in front of our very eyes, beads leaped out of beakers and lessons were learned about temperature, air pressure and proper lab protocol.

How did it do that?

Our first stop on Wednesday was Old National Bank. Campers were split into two groups, with one starting on a tour of the branch and office and then a session on how the bank operates and the other participating in a budget simulation.

During the tour, the kids were able to see the multitude of careers the bank has to offer. There are bank tellers, mortgage officers, business banking—even a dedicated social media person. One camper had never imagined that you could get paid to be on Facebook, Twitter and Instagram all day. Safe to say, he was interested.

A few floors down at the budget simulation, each camper was randomly given an occupation, monthly income, marital status, and number of children. Their task? Budget their monthly income to be able to afford all necessities for them and their family, using any leftover money to save, donate, or spend on leisure. This got interesting. Our campers learned crucial real-world skills such as financial independence, budgeting and how to prioritize based on their needs.

Surprisingly, many of the kids chose to donate their extra income to friends in need. Come to think of it, we’re not surprised – these were truly awesome young people. The Old National Bank staff were exceptional with their energy, excitement and yes, patience with our enthusiastic campers.

After copious amounts of ‘za kindly provided by Ian’s Pizza, the campers were introduced to Ozobots at Zendesk—small, programmable bots with a variety of different functions.

Using different combinations of marker colors along a hand-drawn tracks, our camp kids programmed their bots to move fast or slow, use turbo, or spin like a tornado. Separately, using new-found laptop and software skills, the campers could program their Ozobots to change colors, flash different lights, spin around, and “dance” after calibrating and downloading the selected directions to their bot. 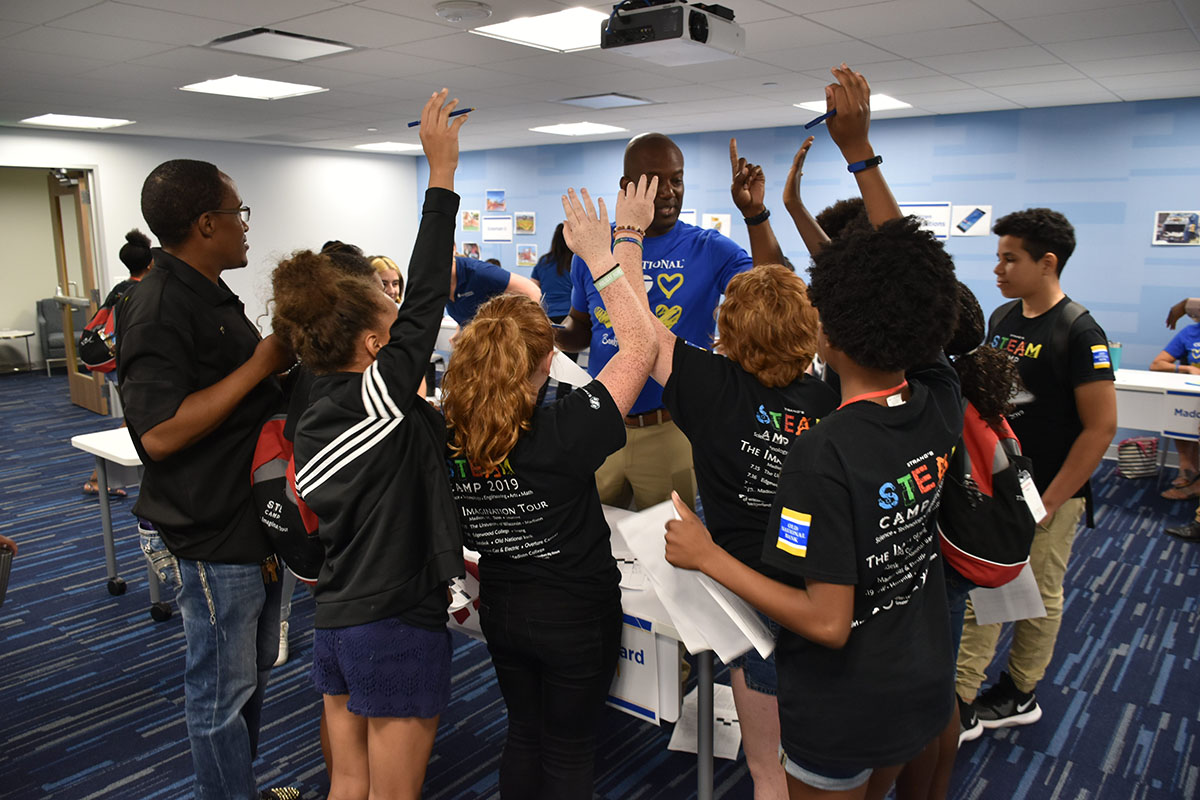 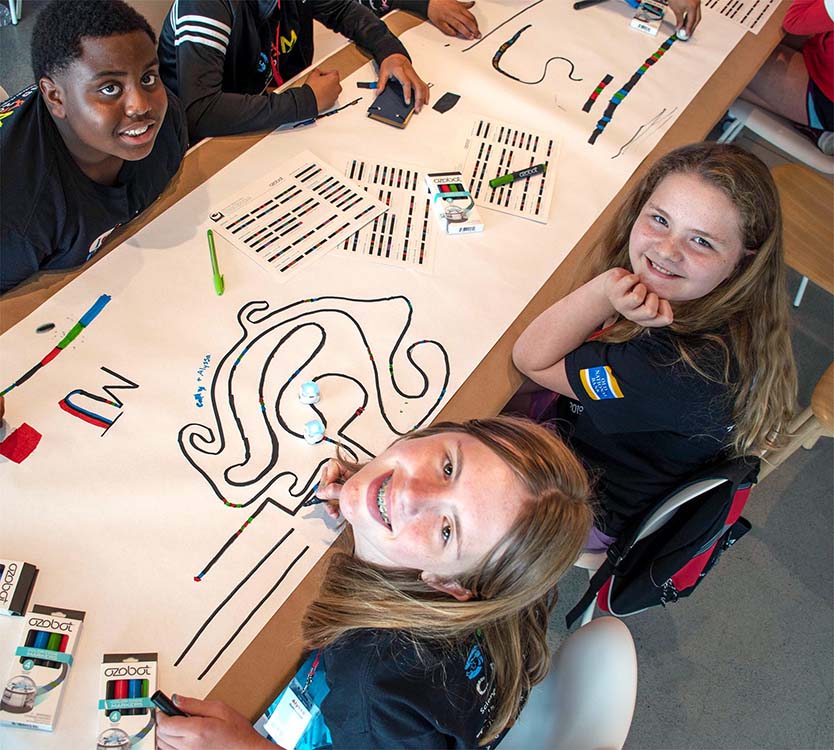 We started Thursday morning off at Madison Gas & Electric. We discovered the importance of renewable energy sources, such as solar and wind power and even got to “tour” MGE’s solar roof using virtual reality goggles!

MGE also shared their passion for electric vehicles with our kids and the campers picked out which electric vehicles based on real-world car shopping criteria—range of a single charge, charging time and of course, if it looked cool.

After lunch, we boarded the bus and headed over to Overture Center for the Arts. Rotating through three different sessions, they discovered what careers are a part of the performing arts, and even got to try some of them out!

They learned about theatre lighting and stage crew careers on the stage of Overture Hall and got to practice adjusting fixtures. They learned some ballet moves and practiced their plies and pirouettes with a ballet master. They also toured the historic Capitol Theatre and backstage areas of the performance center, learning about the history of the theatre as well as what kinds of performances take place in the building.

We wrapped up the day with a panel of performing arts experts to learn more about the variety of opportunities available and how to prepare for a future career in the arts.

We spent Friday morning at UW Hospital. Once again, we were split into groups to rotate through stations. The campers learned about all occupations related to healthcare—from respiratory nurses to MedFlight nurses, and chefs to pharmacists.

They had the chance to make their own pizzas, see a pig lung “breathe” on its own (using a respirator), punch pill capsules in the pharmacy lab, and engage in mindfulness. They even got a special tour of the MedFlight helipad and got to see both helicopters up close! Our time at UW hospital ended with an exciting healthcare word search competition.

For the afternoon, we traveled to Madison Area Technical College to learn about 3D printing, chemistry, and the careers the college provides educational pathways to. Using the 3D pens and colorful material, the campers made their very own sunglasses—with their bright futures, they’re going to need them! In the chemistry lab, the students learned about pH values, and experimented with everyday liquids to guess what their pH values were and then measure them.

Our tour of Madison College revealed that there are many career options available to students—cosmetology, manufacturing, engineering, and so much more!

Before we knew it, Friday was over and unfortunately, so was STEAM Camp. Each camper received a diploma for their participation in this year’s camp. It’s just one week of summer, but it’s made a lasting impact on these 6th, 7th and 8th graders as they continue to move through their education. If they’ve left with an increased appetite for learning about Science, Technology, Engineering, Art, and Math, then STEAM Camp is a success. Planning for STEAM Camp 2020 starts now, and we can’t wait! 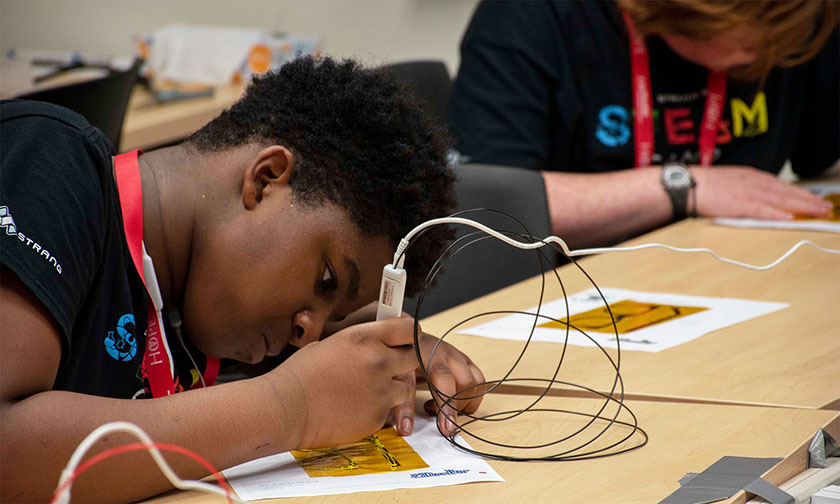 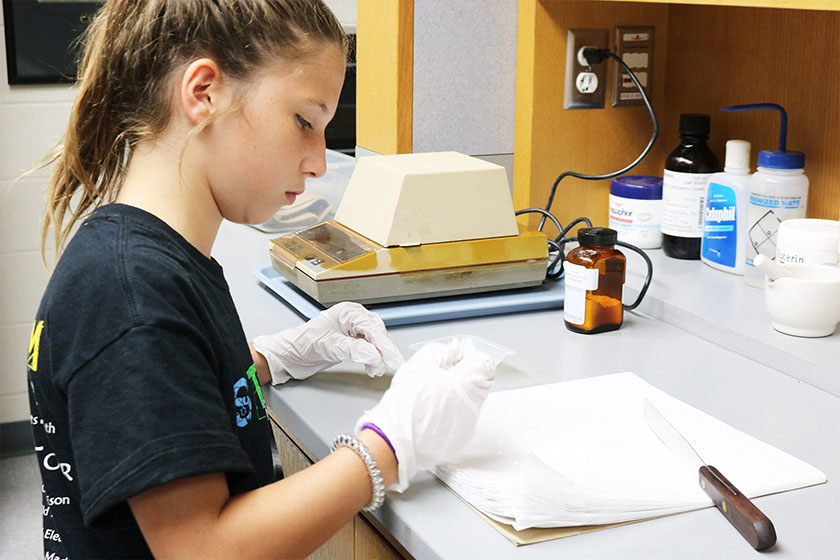 The Week in Photos